Self-Employed? Learn the Psychology of Being More Creative!

I think we all wish we were more creative. 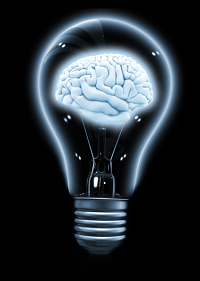 Last year, one of my most popular posts here on Bidsketch addressed some psychological studies on being more productive. I know people appreciated that article because anything that has to do with “self-improvement” is usually laced with anecdotal evidence and some hefty servings of the “hoo rah” mentality over any sincere facts.

Since a huge majority of freelancers are involved in creative work, today I wanted to take a similar look into the subject of creativity to reveal proven academic insights that may help you in your creative efforts.

We’ll be covering ways to boost creative thinking, an important lesson in inspiring creative work, and why brainstorming is actually dangerous to novel ideas.

How to Boost Your Creativity

Creativity is definitely a muddy subject, but there has been some solid research on a few aspects that are known to affect creative thinking.

Below I’ll go over some of the more insightful research in this area. It will take some effort on your part to connect the dots, but overall these studies should be a great place to start when you find yourself stagnating with your creative work or if you are looking for some inspiration.

The reason this is interesting is because some research has shown that an insidious creativity killer we may all have is taking the “path of least resistance” when it comes to creating something new.

(ie, We like building on things we’ve already done before or we’ll use every resource available)

It’s suggested that self-imposed limitations can help boost creativity by pushing people outside of their comfort zone, or forcing them to work around unusual parameters.

One of the most famous examples is the story of how Dr. Seuss produced Green Eggs & Ham after a bet where he was challenged by his editor to produce an entire book in under 50 different words.

I’m no Dr. Seuss, but even I’ve recognized that I get some pretty original ideas when I’m forced to put something into 500 words instead of 1000, or when I’m working around other parameters that I’m not used to.

See if you can limit yourself in some way and spur on creative thinking by making your brain come up with ideas that are essential for getting around these self-imposed roadblocks.

2. Re-conceptualize the problem: An interesting bit of research has pointed out that creative people tend to re-conceptualize problems more often (and on a more consistent basis) than “non-creatives.”

What that means is, instead of focusing on the “cut-and-dry” end goals for new projects, creative people have a tendency to sit back and examine the problem in multiple ways before they begin to work.

Here’s an example from my work — since I handle content strategy for startups, my end goal might be something along the lines of, “Write popular articles.” But approaching a new piece with the mindset of, “How can I write something that will get a lot of tweets?” likely will not result in something very good.

Instead, focusing on issues that will actually capture people’s interest will be much more helpful in getting me towards my metric-related goals.

This is useful to know if you ever find yourself stagnating on projects because you’re too zoned in on generic problems (“How can I improve this client’s website?”). Instead, examine the situation from a more meaningful angle (“What elements on this site only add clutter and are rarely used?”).

3.) Daydream… after you’ve earned it: Although study after study confirms that daydreams, naps, and mental breaks are all essential to the creative process, I’ve noticed that many folks fall for the “trap” of using this to avoid putting in the work!

For instance, one very important study on creative thinking shows that daydreaming is only effective when you’ve poured a lot of efforts into a project.

That is, the less work you’ve already done on something, the less daydreaming and other varieties of breaks will help you.

So while I am encouraging you to take advantage of the incubation process… I’m also saying that you have to earn it first. 😉

4.) Embrace something absurd: I’ll be digging into the importance of “weird” experiences later on in this post, but for now you should know that recent research has shown that reading (or “experiencing”) something absurd or surreal can help boost pattern recognition and your creativity.

In this particular study, subjects were reading absurdest literature (Franz Kafka), but psychologists have noted that even stories like Alice in Wonderland may have a similar effect.

The conclusion most researchers have drawn is that the mind is constantly trying to make sense of the things that it sees, hears, experiences, etc. Since absurd works tend to “not make sense,” it may put our minds in overdrive when we try to figure them out.

I personally like to partake in mind-bending short stories like The Last Question or check out abstract art on places like r/HeavyMind when I’m looking for creative inspiration.

6.) Separate work from consumption: One habit that can damper your creativity is trying to combine your “work state” with your “absorb state.” It’s a common form of multitasking, a process that simply doesn’t work.

Instead, researchers have noted that separating this “absorb state” (or time spent gathering inspiration) from when you are actually working is much more effective when it comes to producing novel ideas.

It makes sense doesn’t it? It’s hard to combine two different states of mind and end up with something truly original as a final product.

Try to structure your days to include distinct blocks of time for inspiration and for pure work; combining the two just leads to your efforts being spread too thin.

6.) Create during a powerful mood: Despite the misconception many people have about “moody creatives,” most research has shown that happiness and joy are the ideal moods in which to create something.

Recently though, a fairly new study on creative thinking within the workplace made this startling conclusion:

“Creativity increased when both positive and negative emotions were running high…”

The researchers stated that while negative moods aren’t as universally beneficial to creativity as positive moods (excitement, love, joy, etc.), in some contexts they may spur creative thinking rather than damper it.

The next time you find yourself in a “powerful” mood, take advantage of it. Try to sit down and harness that energy on creating something new (or reworking a project you’ve already begun), the end result could be very worthwhile.

7.) Get moving: Okay, we get it… exercising is really good for you!

The evidence keeps piling on, as one study even suggests that physical exertion can be great for creative thinking as well. It’s suggested that the real cause here may not be the exercise itself, but like the studies on creativity and feelings of love, it’s the positive mood that results from these actions that really spurs on creative thinking.

So yes, exercising gains yet another notch on it’s belt, as it may be just the thing you need to break free from a creative rut and speed up your “Aha!” moment on a new project.

Have you been to the gym recently?

8.) Ask, “What might have been?”: According to some interesting research surrounding the well established process of counterfactual thinking, examining situations that have occurred in the past and asking yourself, “What if this happened?” can boost creative thinking for short bursts of time.

According to this analysis by psychologist Jeremy Dean:

The Biggest Enemy of Creative Thinking

“Creativity comes from looking for the unexpected and stepping outside your own experience.”

You’re likely not surprised that one of the biggest threats to the creative process is habituation, or losing the novel effect of an action as it’s repeated over and over again.

There has been some coverage of the “expert effect” on creativity, with researchers noting that experts are often so saturated in their field of interest, that they sometimes have a harder time than beginner’s when it comes to producing novel ideas (otherwise known as “beginner’s luck”).

The answer may lie in simply pursuing weird experiences, with “weird” being in relation to the individual and their usual routines.

In a recent paper appropriately titles Diversifying experiences enhances cognitive flexibility, researchers found what you might expect — new experiences that pushed people out of their comfort zones were important in spurring on novel ideas.

This correlates with other research that shows creative people are more likely to do things like travel abroad, and that it’s more common for them to have had a traumatic experience in their life.

You don’t need a traumatic experience to be creative, just make sure you’re switching things up, it’s important to not let your daily routine cause your creative gears to rust.

Many freelancers will end up working in teams or have to collaborate with others on projects.

Since that’s the case, there is something that you need to know — brainstorming does not work.

I hate to be the bearer of bad news (just kidding, I love it) but study after study has shown that if your end goal is producing new and novel ideas within groups, brainstorming just isn’t the answer.

There are a few reasons why…

Okay, so brainstorming doesn’t work… but you still need to be able to work with groups from time to time. In addition, brainstorming does have an added benefit outside of creativity: participating in brainstorming sessions help people to be more motivated to carry out the group’s decision.

So what’s the answer?

According to brand new research, it’s the internet to the rescue!

Research on “Electronic Brainwriting,” or brainstorming via online chat, has all of the advantages of group collaboration, with none of the pitfalls of brainstorming.

By following the general brainwriting rules of…

…you can successfully use the web to brainstorm without the social blocks that seem to hinder brainstorming sessions in person.

You can use one of my favorite tools ever, Campfire, to accomplish this. Campfire allows you to set up a group chat with your team, and it’s very stripped down to the bare essentials with absolutely no bloat.

I only have one question for you today: what are some methods you use to spur on your most creative ideas?

by Gregory Ciotti
Gregory Ciotti loves small businesses & startups and gets nerdy about behavioral psychology on his blog Sparring Mind.
Previous Why Firing Your Clients Can Earn You More Revenue And Save You Time
Next Prevent Scope Creep in 5 Steps (Without Upsetting Clients)