Career Options: The Viability Of Choosing Not To Choose 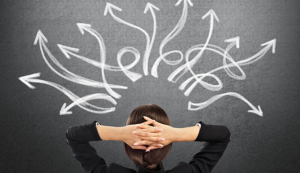 For most of us, we find ourselves living in an existence where we have no choice but to make important choices of all sorts, and then stick to them.

If you think about it, we’re reared and socialized in a completely monogamous society!

From the time that we start school (usually around four or five years old), we’re conditioned that it’s time for us to start thinking about one of the most important choices we’ll make with our lives:

What do we want to be when we grow up?

Children usually answer this question with a mixture of practical and outlandish responses. After all, their minds and their hearts are free! They haven’t learned how to place restrictions on their outcomes, yet.

After we supposedly make the right career choice and we suitably prepare for a host of right choices for our future, we’re then expected to select the right life partner, marry them, then reside in the right neighborhood, located in the right geographic location.

With all of the singularly right choices we’re supposed to make with our lives, it’s no wonder that the concept of options either feels overwhelming or inspires fear and loathing in most people’s minds!

Regarding your future, are you certain that the industry that you’re working within now is the right choice for you, for the rest of your working years? Will your industry even exist in five-ten years?

And is it wrong to explore your career options, even now? Personally, I feel that choosing not to choose is the right choice for your career, and many others do as well!

Let’s delve into the reasons why committing to one career choice isn’t viable, along with reasons why choosing not to choose could ultimately become beneficial for you as a business owner!

Where did the stigma of selecting one career field come from? The idea of selecting a life vocation has always been in play, but it took a strong hold in society during the 20th century as the Industrial Age created a strong middle and blue collar/working class of society.

At the same time, single women were entering the workforce, and since many single women who worked were either poor or hadn’t found a husband, the path for her life was bound in career fields that society set aside for single women, such as teaching or nursing. However, if a single woman lived in a large city, then she often had the option of working as a secretary.

Not only did this serve societal roles for women at the time, but this also served women who hoped to marry out of their condition by connecting with a prosperous business man (Or at least, a white-collar employee who could afford to support her and take her out of the secretary pool).

As you can see, people choose singular career paths because they lived in a world filled with harsher societal expectations. There are a lot fewer options for their lives!

But there was another great reason for the lack of job/career hopping in during the 20th century:

The economy was a lot more stable!

From the mid-20th century through the end, when a prospective employee applied for a job (or when a small business owner started a venture), it was almost certain that they’d generate income for the long haul.

But now, with so much uncertainty in the air, it’s not wise to rely upon skills from one industry in order to provide for one’s self. In a world where jobs and entire industries morph and disappear in the blink of an eye, the entire world has seeming morphed into a survivalist mentality!

And since the key marker of a survivalist is to hustle and prepare themselves for hard times, then becoming professionally diverse is the best step that today’s employee and business owner can take to endure for the long haul.

How To Make Choosing Not To Choose Work For You

The truth is, we’ve already seen the concept of choosing not to choose at work. Some would refer to a person who chooses not to choose (a singular profession) as a multi-hypenate.

Some with old-fashioned thinking refer to such a person as a flake, unfocused, or immature. But Amy Gutman refers to these type of people as slash careerist in her NPR Boston blog post for Cognoscenti.

In fact, she found the term within the 2007 book “One Person/Multiple Careers: A New Model for Work/Life Success.”, written by Marci Alboher.

And Amy quotes the author Gail Sheehy with this:

A single fixed identity is a liability today. It only makes people more vulnerable to sudden changes in economic conditions. The most successful and healthy among us now develop multiple identities, managed simultaneously, to be called upon as conditions change.

Recent research also suggests that developing multiple identities is one of the best buffers we can erect against mental and physical illness.

For example, she talks about the ability to develop a stronger foundation for one’s future career choices. In other words, the skills that become develop within one industry can transfer and fortify a new career choice.

She also discusses the ability to open more doors. She uses the example of a friend who majored in Business and was able to call upon those skills (and their education) when they decided to become a full-time international photographer.

Then, there was the friend who was able to combine her love of music and the respectability of the medical field by becoming a music therapist.

And speaking to a point that I love, Natalie points out that certain career choices enjoy various levels of prestige, internationally. So if a person is thinking about a certain country to immigrate to, then they might find that their wide variety of skills and talents will play well in their new living environment.

We live in a world where we can run a startup, have a day job, and work remotely at night if we want to—so why not take advantage of it? Don’t get me wrong—doing many things can be stressful, but it can also be exceptionally gratifying.

If you can find the right balance, doing what helps you bring in a paycheck and also pursuing your interests will enable to you feel like you’re pursuing the career of your dreams, even if it’s a nontraditional one.

But What If You Just Can’t Decide?

After reading all of this, you might have come to the conclusion that your problem isn’t your ability to choose between one or more options-your problem is your lack of ability to make any choices at all!

You especially might feel this anxiety if you’re currently working in a field (or have started a small business in a field) that pays the bills and allows you to work location independently, but you have no idea of what you really want to do with your future.

Jamie Varon wrote in the Huff Post about resisting the urge of feeling like you’re falling behind in life. Again, it’s a societal construct to pick a vocation, stick with it, and build your person brand upon your vocation.

But you might not be in a personal place of making this happen. Or maybe, you don’t want to build your life or your personal brand around your current vocation, and that’s okay, too.

You don’t get to control everything. You can wake up at 5 a.m. every day until you’re tired and broken, but if the words or the painting or the ideas don’t want to come to fruition, they won’t…

Sometimes the novel is not ready to be written because you haven’t met the inspiration for your main character yet. Sometimes you need two more years of life experience before you can make your masterpiece into something that will feel real and true and raw to other people…

You don’t get to game the system of your life. You just don’t. You don’t get to control every outcome and aspect as a way to never give in to the uncertainty and unpredictability of something that’s beyond what you understand. It’s the basis of presence: to show up as you are in this moment and let that be enough.

And with all of this said, sometimes, the best choice is to choose not to choose.

by Terri Scott
Terri is a content marketing storyteller and strategist. She teaches marketing and entrepreneurship through stories for marketers of all stripes. Her specialty is creating narrative and she writes essays and memoir in her spare time. You can view her work at terriscott.contently.com, and she'd love to hear from you: https://www.facebook.com/profile.php?id=100011073971177
Previous How to Beat the Feast or Famine Problem in Your Business
Next Marketing for Introverts: What You Need to Know