8 Networking Skills that Every Professional Needs to Have

When it comes to most advice on networking, many business publications place too much emphasis on “what’s easy” rather than “what 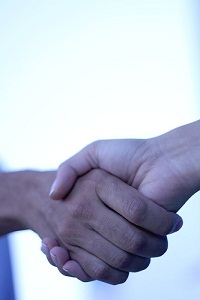 This has only been amplified by the recent dominant presence of social media.

…it’s no wonder people get frustrated when they look for information on how to properly network with others.

Networking also has a somewhat ‘sleazy’ association to it: people picture the grease-ball haircut on the really loud guy with 800 business cards who’s all talk and no action.

The thing is, good networking does not have to be this way, not at all.

So set aside your bias against networking, and step into ‘natural networking’ for building real relationships with people who can help you get where you want to be.

If you’ve struggled with sincere networking in the past (as I have), definitely give this list a run-through and take notes when you notice an area where you can improve your own networking habits.

As a last bit of advice before we get into the list, be sure to network outside of your industry from time to time!

We often get so focused with business related networking that we never reach out to people who may be doing cool stuff in other fields of work… and you never know what may come of it.

This is my solution to one of the most common questions about networking: how do I get started?

If you’re worried about jumping in to networking or how you can keep it as a habit, just follow this one simple strategy — every other day (or every day, or twice a week, etc.), reach out to one person who’s work you find interesting.

Don’t ask for anything (more on that in a minute), just reach out with an email that shows your mutual respect/interest in what they do, and that you just wanted to say “Hey” to a person doing cool things.

That way, you have no fear of coming off as sleazy/begging, will consistently reach out to new people (not just for a week before you quit), and you’ll likely come across a lot of interesting folks in your industry, which is always a plus.

2.) Stop Being an Internet Panhandler

As a guy who loves studying behavioral psychology, one of the most interesting topics to me is what exactly changes in people’s personalities when they interact with others online. Not much has been published on the subject, but the online disinhibition effect is one that we all probably recognize in one way or another.

The point is this: People on the internet tend to lack diplomacy & tact, and one of the ways that this rears its ugly head is that people will ask for things on the internet that they’d never expect someone to give them in “real life.”

While most people on the street would be hesitant to ask a stranger for $10, on the internet people will ask for THE WORLD and then get upset when you don’t deliver!

As an example… when I recently wrote a huge article on productivity, I got a lot of good emails after it was published from people who enjoyed it (more on that in a bit).

“Sure thing, my time is apparently worth nothing to you so let me drop everything I’m doing and call you up!”

As freelancers, many of us know this feeling all too well, yet a lot of us still suffer from “internet pandhandler syndrome” when trying to network with people. I wrote in my previous post on freelance marketing about how I was able to land features on big publications through email, and I included a single tip that can help you avoid this annoying habit…

Don’t ask for anything in the first email!

Genuine networking doesn’t start with your hands out during the first contact.

3.) Know Who You’re Reaching Out To

This should be a no-brainer, but if you’ve ever gotten an unsolicited email that felt like a spam message but actually wasn’t, you know what I mean here.

You can stand out by doing your homework and actually getting to know some facts about the person you’re about to reach out to, beyond the “surface level” stuff that everybody already knows.

People reach out to me a lot of discuss content strategy, and I’m flattered when they bring up some work of mine that they saw on Help Scout, Bidsketch, or any other place I regularly appear.

As basic as that may seem, remember point #2… on the internet, everyone comes across as: “Blah blah blah enough about you, let’s get back to me!”

Separate yourself from the pack and actually come prepared knowing about the person’s passion projects, and I guarantee you’ll get remembered.

I actually talked about this in my list of customer service skills, and this is true for building proposals (as described in this example eBook about software development proposals), but it goes far beyond dealing with customers — it’s great for networking too.

This is especially true when you consider that so much communication today is done via text, and it’s hard to display emotions and other subtle cues without the other person’s face being in sight.

“Hey. I want to do an interview with you on your new project by this Friday, we have very similar audiences.”

“Hey, I’d love it if we could do a quick interview sometime soon on your new project, my audience loves your work.”

While “saying” the same thing, you likely immediately realized that #2 was far more inviting and using positive language to get the same message across, but without the bluntness (which can be misinterpreted for rudeness via text) of the first example.

When in doubt about the tone of your message, it is best to keep this rule in mind and evaluate whether or not you are using positive language, there is essentially no downside (just don’t be overly chipper or “Whoo hoo!” for every single message) and it is a great way to avoid communication problems that stem from using harsher language.

As much as many people may not like to hear it, “All contacts are equal, but some are more equal than others.”

You’re going to come across people who become power contacts as you become more connected with those in your industry. These people will be the ones who are constantly introducing you to new/interesting contacts, referring you to others for more work, and just generally pushing your business forward.

I can name one supernetworker of mine in Leo Widrich, co-founder of the BufferApp.

Although we’re both busy, I try to stay in regular contact with Leo, make contributing to the Buffer blog a monthly priority, and constantly make mentions of Leo wherever I post (hint hint).

These are simply the contacts you’ll form where the “give and take” has reached a fairly high level, and you’re both willing to support the other where possible.

Be sure to keep an eye on these people, networking isn’t always Pareto principle in practice, but in many instances your most frequent contacts will be the ones that really matter.

You don’t need to know the most people, just the right people.

Real business gets done over email.

A tweet may get someone’s attention, but when it comes to establishing real relationships, the conversation truly begins when you start the reciprocity via email.

That said, you should know how to write a good email, both during the “outreach” stages of networking and when you’ve already established a connection.

Let’s break some advice down for each stage…

When you’re looking to initially get someone’s attention, you need to tread carefully.

Here are 3 good pieces of advice for outreach emails:

Once you’ve established contact, the conversation begins to shift quite a bit (obviously). It’s similar to when you make a new friend vs. talking to a friend you’ve had for 2 years, you’re familiarity changes what you talk about.

That said, don’t let your good connections go to waste over a bad email.

Here’s how you can improve the next stage…

This “skill” is actually one of the most important of all, because with the right mindset you can usually avoid many of the big networking mistakes out there.

When you are always out to get something, you are not truly networking with people, you’re just running a long-term manipulation game.

The RIGHT mindset is to know that creating a big network is the smart thing to do, but also understanding that whatever comes should just come, you don’t need to actively be pestering your connections for everything.

It’s great when a new connection works out from a professional standpoint, but it’s hard to measure some other things that having a large network can bring, like…

Just because a connection doesn’t result in more direct dollars in your bank account doesn’t mean it was fruitless, and you shouldn’t be pursuing connections with people just to wring something out of them.

Yikes, somewhat of a controversial point to place on a post about networking, no?

The thing is, this skill is an absolute must to learn.

Eventually, you’re going to come across “leeches,” people who you’ve connected with but don’t see the relationship as give-and-take, more like, “How much can I get out of you?”

Networking is supposed to help you grow your business by meeting genuinely awesome people, not create a network of vultures who only reach out to you when they need something.

Cut these people off, and fast, you don’t need anyone holding you back.

Note that this isn’t the same as people who want to help you, but can’t and don’t ask much from you. This advice is for the greedy, those hitting your inbox with favor after favor that never gets returned.

Now I need to hear from you.

Thank you for reading, I’ll see you down in the comments!

PS: If you want to network with me or just reach out and say hi, contact me via email or feel free to follow me on Twitter (@GregoryCiotti).

by Gregory Ciotti
Gregory Ciotti loves small businesses & startups and gets nerdy about behavioral psychology on his blog Sparring Mind.
Previous 10 Negotiation Techniques to Successfully Raise Your Rates
Next A Dead-Simple Customer Profile Template that will Massively Increase Sales