Is Working a Fixed Schedule Helping or Hurting Your Productivity?

The biggest benefit of being self-employed? 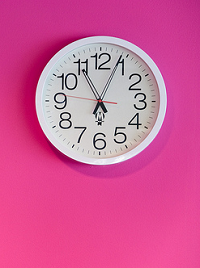 Many would assume that it’s the freedom to work on your own time.

But as those of use who’ve been doing this for a while know, “on your own time” isn’t always the dream setup that many people assume it to be. Fact is, flexible scheduling can also lead to flexible discipline, not to mention that your ‘always on’ availability can result in you doing work at odd hours, which interferes with your free time.

Not to mention, the problem with time zones and client meetings sometimes needing to happen at odd hours (locally).

Even when you go through the trouble of finding a time that works using my favorite time zone converter, getting an agenda ready, and nailing all the details, chances are someone in a different country is going to not be at their best because it’s too early or late in the day for them.

Just like the fixed rates vs. hourly rates debate, freelancers seem to be quite divided on this issue. It’s for this reason that I’d like to present the compelling cases from both sides of the argument, and find out whether you feel that a fixed schedule helps, or hurts, your productivity when you work for yourself.

We’ll examine a fixed scheduling system from a college professor and MIT graduate, and compare his assertions with arguments made by a CEO and best selling author.

The Case for Fixed Schedules

A fixed schedule, otherwise known as working a set block of time with zero extra work and minimal exceptions, has seen a resurgence in popularity among the self-employed as of late.

It’s easy to see why—in a world with a seemingly infinite amount of choices, it’s often nice to be guided by constraints, as strange as that may seem at first. In the book The Paradox of Choice, research is discussed that reveals a fairly shocking (but understandable) conclusion: when we have a too many options, we tend to feel unhappy, because we focus on the many “what-ifs” instead of engaging in our much needed time on autopilot.

Can this abundance of choice affect our work lives as well? Proponents of the fixed scheduling system seem to think so, and they propose a solution of voluntary simplicity that limits when you can commit to work.

One of the leading supporters of this fixed schedule discipline is Cal Newport, MIT grad and professor at Georgetown University.

Through a system he calls Fixed Schedule Productivity, Cal showcases how he manages to only work from 9-5 (plus a little on Sunday morning) to manage all of the things he has on his plate. It’s quite impressive when you come to realize that he juggles a myriad of activities, including research papers, TAing for his university, and writing multiple books.

The premise of Cal’s system is simple on paper, but difficult to put into practice:

Fix your ideal schedule, then work backwards to make everything fit — ruthlessly culling obligations, turning people down, becoming hard to reach, and shedding marginally useful tasks along the way.

Cal argues that this seemingly backwards way of organizing your schedule is effective because it forces you to work within constraints.

When your day must end at 5pm, you become more willing to abandon excessive tasks that don’t move you towards your big goals, and you’ll find yourself with a focus that’s hard to emulate without this sort of impending deadline.

His thoughts are supported by academic research—one study in particular by Dan Ariely clearly revealed how strict deadlines were able to help college students increase performance (consistently). Remember that your average college student actually does have a pretty flexible schedule, one that is far more similar to a freelancer than your “traditional” 9-5 job.

When you have confinements, you are forced to let stuff go and prioritize what matters. Without this pre-commitment and pre-set amount of work time, you can often find yourself saying yes to everything, which often leaves you working on the minutiae.

Here’s a simple metaphor: If you had an unlimited amount of suitcases to use for a big trip, you’d probably end up over-packing. Yet, if you limited yourself to a single suitcase and a carry-on, you would probably be surprised with how little you actually needed.

The same idea applies to having a fixed schedule—we often make mountains out of molehills by giving ourselves too much leeway in getting things done. With a strict schedule, we certainly amp up the urgency, but we also truly find out how much we can get done when our time is consolidated.

The Case for Flexible Schedules

As much as I tend to agree with Cal’s premise, I find myself torn when it comes to whether or not I should implement it—as a matter of fact, the last time I outlined tactics on how to be more productive as a freelancer, I cited an argument from Tony Schwartz on the Harvard Business Review that somewhat disagrees with Cal’s assertions.

In practice, Schwartz simply argues that you should structure your day around doing your “synthesis work” (when you are creating something) at peak productive hours. Through the use of tactics like planned breaks, Schwartz recommends a total avoidance of pacing yourself in favor of working hard and taking a rewarding break afterwards.

Where Schwartz’s ideas begin to offer a counterpoint, however, is that this management of energy doesn’t really rely on a set schedule—you could easily end up “working” from 8am – 8pm, but with many long breaks in between.

While this view on doing more with less isn’t specifically averse to your standard work schedule (that is, Schwartz encourages 9-5 workers to apply it as well), the idea that you should work around your energy instead of around time definitely is.

We also have to consider the well reasoned arguments from outside of the academic circle.

Perhaps you find that your best work is done early in the morning and then sometime much later at night. This sort of reoccurring habit may fit best with your energy levels, but it definitely doesn’t fit the rules of the fixed scheduling system.

Or perhaps you like and actually thrive on a solid 12-hour work day… but only when you have a nice, easy 4-hour day afterwards.

Schwartz’s soundbite on our differing levels of energy:

It’s not just the number of hours we sit at a desk that determines the value we generate.

…also paints a clear picture that if your work and state of mind are inhibited by confining yourself to a schedule, you should do your best to avoid it, and sit down only when you can produce your best work.

I don’t think many of us would disagree, but as aforementioned, this goes against some of the very convincing points made by Cal Newport and others on the benefits of rigid scheduling.

So which one is correct?

We Need to Hear from You

When it comes to your productive output and overall enjoyment of your work, do you rely on a strict schedule, or do you find that a flexible schedule is better?

Why is this the case for you? Have you ever considered trying the opposite?

We’d love to know, so get those opinions locked and loaded and fire away in the comments!

by Gregory Ciotti
Gregory Ciotti loves small businesses & startups and gets nerdy about behavioral psychology on his blog Sparring Mind.
Previous How to Apply the 80/20 Principle to Your Freelance Business
Next Freelancing and Product Creation: Paul Jarvis on Creating Meaningful Side Projects