8 Ways to Stop Being Afraid of Success 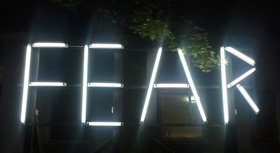 Have you ever been right on the verge of a major success and found that everything starts to go wrong? Mistakes suddenly happen out of nowhere, you procrastinate or make decisions you know are bad, or perhaps you say or do something stupid and eminently avoidable.

And then, when your plans finally crash and burn, you feel relief. ‘It wasn’t meant to be’, you tell yourself. ‘These things take time.’

Recognize yourself here? If this scenario is striking a chord, you may well be grappling with a classic case of fear of success.

So, how on earth can you get to grips with such a complex issue? Fear not! This article is here to help you move towards your goals with confidence by giving you eight ways to stop being afraid of success.

Before we get to our steps, let’s consider the subject of fear in isolation first.

Begin by Admitting Your Fears

The first step in solving any problem is admitting it actually exists. Fear can be a hard thing to face, and fear of success is a particularly hard thing to admit to in the first place.

Success can actually be a scary prospect! Suddenly, everything you were hoping for – and all the attendant responsibilities it involves – is coming your way.

Try and get specific about the direction your fear lies in as soon as possible. It could be a fear of not coping, for example. Or maybe you’re worried about losing touch with your dreams. Strange though it may sound, some people panic at the thought of success changing them. Others secretly fear that they don’t really deserve success at all.

Whatever the root source of your fear is, acknowledging that it is there, and being as specific as possible about it in your head, is an essential preparatory stage to get over before actually tackling it. Once you’ve looked your fear in the eye, you’re ready to to start using our eight steps to conquer it.

Let’s get to work!

1.Look Back with Pride

Take a moment to honestly review how you got to where you are today. You’ve undoubtedly coped with myriad challenges in your life and work to date, your current situation is just one more. Write down examples from your past where you’ve coped in similar circumstances and use these experiences as a well to draw confidence from.

Even if there are times when you’ve failed, it doesn’t mean that success will lead inevitably to another failure. Legendary leaders all vouch for the benefits of having failed. Robert F Kennedy summed up the mental attitude required perfectly: “Those who dare to fail miserably can achieve greatly.”

Choices are what got you to where you are today. Be honest with yourself – are you happy with the choices you’ve made? Inevitably, not all of the ones you’ve made will have been optimal. Make a concrete list of the good ones and the bad ones that have led you here. Secretly suspecting you’ve made bad choices is a key ingredient in fear of success. By examining your previous choices dispassionately, you remove some of this fear’s fuel.

It’s important to remember that success in itself is neutral – it doesn’t change you. Only you can change yourself. Think of change as adding to, rather than subtracting from, you and your life. Change can be exhilarating and experts stress the need for it to be embraced.

Face this aspect of your fear head on by drawing up a mental list of potentially positive outcomes and use this to counter any negative expectations regarding the changes success might bring.

The success you want to achieve depends on your talent and hard work, not whether you “deserve” to succeed. Criticism, tough though it may by to receive, is key to improving so it should be welcomed rather than feared.

It is important to be able to put your ego aside and embrace genuine feedback as valuable. If someone offers what you feel is unwarranted criticism, turn it round – challenge them to prove their point, rather than making you defend yourself.

By making criticism your friend – instead of a foe you tremble before – you can confidently anticipate success, rather than worrying about the feedback you’ll have to expose yourself to in order to achieve it.

For solid evolutionary reasons, the human mind is designed to focus on danger and potentially negative aspects of your environment. This is a handy trait to have when you’re trying to avoid being eaten by bears as you forage for food, but not so useful in the context of building long-term success as a freelancer.

Fear of success is often a natural byproduct of our brains’ tendency to dwell on the negative, so we really do have to make a conscious effort to accentuate the positive. We’re not simply talking about wishy-washy positive thinking here, this is a real mental skill that must be learned and cultivated.

6. Remember Why You Started

What was it that lit a fire under you when you started as a freelancer?

This is an important question to revisit because it helps identify old issues that may be lurking behind your current sense of unease at the prospect of actually achieving your goals.

If your initial drive for success was based on potentially negative factors such as “showing someone they’re wrong”, you may need to recontextualize your motivations to be able to fully embrace the prospect of success. As with most of our points, honesty is the key here to truly making progress.

Fear of success often simply boils down to nervousness about the scale of the further challenges success may bring. Rather than hiding behind this fear and stalling any chances of wider progress, take the time to list what these challenges may actually be and consider them each in isolation.

Once you start breaking things down in concrete terms, you’ll often find that what seemed like a potentially terrifying mountain to climb is actually just a relatively simple set of sequential tasks to be executed.

One core component of many people’s fear of success is the lurking terror that any kind of success will shine an unpleasant spotlight on a whole slew of critical weaknesses they have somehow managed to keep hidden up until now.

That might sound a little far-fetched to some, but I’m sure a significant percentage of you will be reading that last sentence with an uncomfortable sense of recognition.

The truth is that everyone has weaknesses and they are nothing to be ashamed of – providing you’re clear on what they are and have a plan to address them. Look your weaknesses in the eye and start making concrete plans to address them, rather than sweeping them away in the corner of your subconscious.

You’ll find two things happening when you start to do this: many of the supposed weaknesses will turn out to be imaginary, and you’ll face the prospect of future success with much less fear.

Crazy though the idea of being afraid of success sounds when you first hear about it, it’s a very real problem that can genuinely stymie people’s progress and lead to all kinds of regrettable self-sabotage. It’s also an affliction that freelancers and small business owners are particularly prone to.

If you find this problem rearing its head in your own life, calmly walk through the eight steps we covered to stop it in its tracks.

We’d also love to hear if this is a problem that’s affected you in the past, and whether you’ve got any tips to share with other readers? Get in touch via the comments and let us know!

by Tom Ewer
Tom Ewer and the WordCandy team have clocked some serious mileage as freelancers, agency employees and even agency owners over the years, and they love sharing their combined expertise here on the Bidsketch blog.
Previous Four Great Tips For Identifying Your Value Proposition
Next How to Write a Freelance Writing Proposal