3 Proven Ways to Improve Your Client Testimonials for More Sales 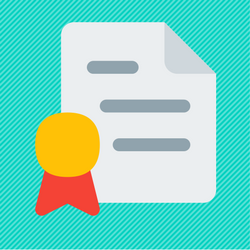 P.T. Barnum was a guy who knew a little something about drawing crowds, and his advice above stands as one of the most important things you need to learn if you want to grow a successful business…

Your leads and customers care more about what other customers have to say over anything else.

This is known as social proof, and it’s one of the most powerful ways to influence and persuade people, especially when it comes to landing clients and closing more sales.

It’s something that should be a key aspect of marketing your business to new clients, landing your next client proposal, or negotiating higher rates.

Unfortunately, many freelancers just like to slap up the latest, “Good job!” they got from a client and assume that’s going to make the cut.

The good thing is that there are a few easy ways to improve your client testimonials without resorting to bugging your clients, being too “sales-y”, or worst of all, being dishonest.

In an age where the Web has such a pervasive presence in our everyday lives, you probably won’t be surprised to find that the way people shop nowadays is quite different from way back when.

According to these statistics, up to 95% of American shoppers now say that they look at reviews online before making a purchase.

You can also see from data in this article that nearly 63% of consumers indicate that they are more likely to purchase from a site if it has reviews and testimonials.

It’s not hard to imagine how that translates over to freelance work — customers today want you to “show them the money” in the form of real customers that you’ve helped in the past.

Proof positive that you should be taking your testimonials very seriously!

Here’s how to step them up a notch…

1.) Use Photos to Increase Trust

Let’s start with an easy one!

Here’s the thing: Just because your customer testimonial is true, doesn’t mean people will believe it.

It is a somewhat frustrating but important lesson to learn.

Fortunately, new research on “truthiness” (any Colbert fans out there?) shows that images can increase trust with nearly anyone… even if the images are nonsensical!

The researchers found that by adding an image to a statement (even if the image didn’t show any proof), respondents trusted the statement far more often. Picture a statement about the human body accompanied by a stock photo of a doctor… that’s what they mean by nonsensical.

Fortunately, you can apply this in a way that actually makes sense — by adding a photo alongside of your client testimonials.

In the same way that you would use a product testimonial…

…add a quality photograph of your client next to the nice things they had to say about you.

Be sure to also utilize the power of headlines + grouping, as you can greet potential clients with a full selection of satisfied customers, like so: 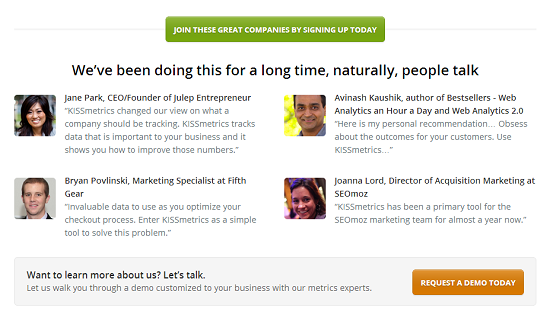 This simple tweak will literally give a “face” to those who had such kind things to say about you, and considering that photos have been proven to increase empathy as well as trust, I’d say you better start adding them!

One of the most effective testimonial “styles” is the customer story.

While a 5-star review will catch a prospective client’s attention, a personal story about how you solved a huge headache for a customer will resonate with them like nothing else.

According to psychologists Christopher Chabris and Daniel Simons (authors of The Invisible Gorilla), stories are persuasive and more trustworthy than statistics because individual examples stay lodged in our minds, but statistics and averages do not:

Our ancestors lacked access to huge data sets and experimental methods. By necessity, we learned from specific examples, not by compiling data from many people across a wide range of situations.

Some interesting research on storytelling reveals that stories work because they are able to slip in under the radar and wrap us up in the tale. Essentially, transportation leads to persuasion.

It’s easy to ignore marketing gimmicks, but stories create a sense of suspense that must be seen to completion (“What happened next?”)

They are also very easy to relate too, and if a potential customer comes across a client who had a problem that has caused them some massive headaches (“My site was down and I was freaking out! But ____ came to the rescue!”) then they will be falling over themselves to hire you.

3.) Harness the Power of Implicit Egotism

Doesn’t it frustrate you when you’re being lectured to by someone who can’t possibly relate to what you do?

You are not alone! According to a psychological concept known as “implicit egotism” we relate to people far better when they resemble us in some way.

It results in some seriously weird stuff, such as ownership bias (valuing your crappy CRT TV for more than it’s worth at garage sales just because you own it) and it has even been shown to influence people when it isn’t true!

In a study conducted on implicit egotism, researchers found that those people who were told they had a similar birthday to Grigori Rasputin (the mad monk) held a far more favorable opinion of him than others… even though it wasn’t true!

What this means to you: You don’t need to worry about Rasputin, instead, you should be utilizing this information to improve your client testimonials by nailing down you ideal customer and then trying to get a review that appeals to their exact desires.

Instead of trying to get a hold of the biggest & baddest dude you can find (like the CEO) for comment on your work, think about which type of person is likely to hire you.

If, perhaps, you offer copywriting services, it might be the marketing director. If you do contract design work, maybe the lead designer of most companies is the person who reaches out to you.

When they see someone like themselves on your homepage or hire me page, they can relate better to the comments that the testimonial has made about your work.

Trying to get the person highest up the ladder that you can (or your most famous client) to give you a testimonial can be fruitless if you aren’t appealing to your ideal customer’s ego.

What Do You Think?

Let me know what you thought of these simple tactics of using client testimonials to improve your sales!

If you haven’t already, make sure you pick up our free proposal templates, and think about what type of social proof you can include next time you’re pitching a client.

See you down below!

by Gregory Ciotti
Gregory Ciotti loves small businesses & startups and gets nerdy about behavioral psychology on his blog Sparring Mind.
Previous Going for the Upsell: The Step-by-Step Guide to Convincing Your Clients to Buy More
Next How to Grow Your Business Like a Silicon Valley Startup (Even If You Aren’t in Tech)