How to Increase Your Employees’ Productivity 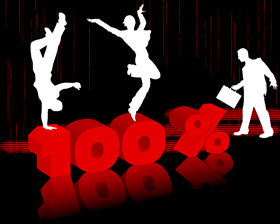 At some point in your career — either as a business owner or a freelancer — you made the choice to not go it alone. You enlisted some outside help. And that’s great.

However, these “employees” (whether remote or working beside you) aren’t giving you their one-hundred percent. They aren’t threatening to keelhaul you by any means, but, even without imminent mutiny, you simply aren’t satisfied. The work they’re doing is “okay,” but it could be better.

Here’s the thing: employee productivity is closely linked to motivation. And motivation is linked to happiness. Therefore, happy employees are the most productive employees.

In other words, you get what you give. How happy are your employees?

Here are eight ways to increase your employees’ productivity by keeping them at their happiest:

In a recent study it was revealed that 70% of workers don’t need monetary rewards to feel motivated. In fact, recognition for a job well done motivated them far more than a cash prize.

Don’t be stingy with praise! If your employee is doing a great job, say so. And, every once in a while, toss in an extra perk like a free sample of your new product or a gift card for a cup of coffee.

However, a word to the wise: while general praise should be given out without reservation (don’t hold back!), additional bonuses should be kept as “once in a while” treats. A surprise perk after an exceptionally well done job can boost morale and productivity; but, if you make it a habit, your employee will come to expect it — and may not perform well without it.

Very few people truly listen. Most of us listen with the intent to reply. And while there’s nothing especially wrong with being the cleverest person in the room, you may have a problem on your hands if your employees aren’t being heard. Listen to what they have to say (and what they’re not saying).

What concerns do they have about the project at hand? Is everything going well? Or, if they aren’t the talkative type, what are their actions telling you? (Have they been slipping up, but are too scared to address the problem directly?). Listening is a sign of respect, and respected employees strive to go the extra mile.

Of course, communication is a two-way street. Have you been telling your client what’s up with you? Or do you keep them out of the loop for days or weeks at a time?

A lack of communication makes people nervous. We’re living in an era where the economy, worldwide, has not been up to snuff — and people fear for their jobs, hopping from income source to income source at the first sign of trouble. If you don’t keep up a steady stream of communication with your employees, you risk them looking for work elsewhere (and being distracted whilst still “working” for you).

If you’ve hired freelancers, then you already know that you can control how they work — and how the final product turns out — but not when they work. (It’s one of the many perks of the freelance lifestyle!). However, even if you’ve hired more “traditional” employees, offering them a bit of flexibility with their schedules could help to increase their overall productivity.

In a recent survey employers were asked what the impact of offering flexibility options was on their employees’ productivity. Sixty-four percent said flexibility improved employee engagement, whilst sixty-five percent said it boosted employee motivation. Not bad.

However, flexibility shouldn’t mean a lack of accountability. Let your employees take breaks and set their schedules to suit their optimal work habits, but set ground rules. You’re running a business, not a slumber party. Work still needs to get done.

4. Hire the Right Person for the Job

You get the idea.

We each have things we’re good at and things we’re not. And while your employee might be able to “make do” in a position they’re unqualified for, they won’t be comfortable — and they won’t be as productive. When you’re constantly wondering “Am I doing this right?” you leave little room for advances in productivity. Hire the right person for the job at hand, even if it costs a little extra. Which brings me to…

You aren’t just asking your employees to increase their productivity, you’re asking them for hours out of their day. Are you paying them fairly for those hours?

Even the most loyal of employees can get distracted if they aren’t paid well enough. If you’ve put your employees in a position where they’re constantly wondering how they’re going to “make ends meet,” then they aren’t going to be giving their full attention to the work at hand. And productivity will drop.

This is especially important if you are — or want to be — your employee’s sole source of income.

You don’t have to break the bank, but you do have to shell out enough to give them peace of mind. If they aren’t being paid well for the hours they’ve dedicated to you, they will leave. I guarantee it.

If you notice a dip in productivity from an employee who used to be exceptionally on the ball, they may be bored. This is a touchy subject… And one your employee likely won’t bring up directly. (This is where your communication/listening skills from #1 will come in especially handy).

Challenge them. Let them try new/different techniques once in a while. Give them a task that’s not usually on the roster. Rejuvenate their brains, even if their job is mostly labor-intensive.

Ask for your employee’s opinion on something. Make them think. Don’t grill them or give them a pop quiz (no one likes those!), but give them something that breaks them out of their autopilot mindset. Stir up their day and show them that you’re paying attention; and that the work they’re doing does make a difference.

This goes hand-in-hand with communicating openly with your employees, but is in a class of its own.

Whilst it’s important to dish out positive reinforcement on a regular basis and not be stingy with compliments, it’s equally important to offer up constructive criticism and state when you’re displeased. If your employee has done or is doing something you don’t like, let them know immediately — don’t fester.

Your employees aren’t against you. It’s far more likely that they’re simply unaware that they’ve done (or are doing) something that isn’t up your alley. Let them know, plan a course correction together, and then you can all move on with increased productivity.

Going back to the idea of keelhauling and mutiny for a moment: you’re the captain of this ship. You’re the leader. Therefore, it’s up to you to plot the course and show your employees the way to success.

Focus on the future and clue your employees in on what that future is. What are you all working toward? What’s the end game?

Let your employees know which tasks should take priority and why. Give them goals to accomplish — and checkpoints along their journey to let them know they’re making significant progress.

As the boss, it can be hard to remember what it was like to be an employee. Put yourself in their shoes as often as you can. When you’re working for someone else, rather than yourself, the days can sometimes blur together. And the work that you’re doing day after day can begin to feel pointless, with no end in sight.

Show your employees that there’s a light at the end of the tunnel. That they’re working toward something real, and that their contribution makes a significant difference in whether that light gets brighter or dims until it goes out.

When productivity has a real, tangible, reason behind it, it goes from being “busy work” to something with meaning. Something worth doing. And, in the end, whether we’re bosses or employees, we’re all searching for meaning in our lives. Make productivity a part of that and both you, and your employees, will be so much happier.

by Tom Ewer
Tom Ewer and the WordCandy team have clocked some serious mileage as freelancers, agency employees and even agency owners over the years, and they love sharing their combined expertise here on the Bidsketch blog.
Previous What to Do When a Client Disappears in the Middle of a Project
Next 5 Ways to Create the Ultimate Virtual Office