Why Freelance Writers Get Paid Less Than Web Designers

Hey writers, can we get real for a minute? 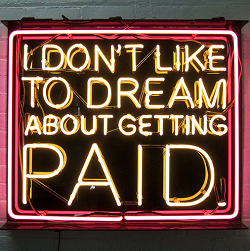 Web designers are kicking our butts in terms of earning potential at the moment, and I felt like this article needed to be written in an attempt to explain why.

While right now is one of, if not the best time to be a writer in general, there is great disparity in the earning power of most writers online.

That is to say, a majority of ‘freelance writers’ tend to be fighting for bottom-of-the-barrel rates for work that isn’t rewarding on any level (in terms of creative expression and personal branding), while a smaller selection of folks are killing it with their writing.

While this sort of food chain exists in every industry (even web design and development), I can’t help but feel like the divide is getting dangerous for writers.

There has been so much coverage on why it’s hard to be a well-paid writer in a world that wants writers work for free, that I can’t help but notice how crappy things are for so many writers these days (be sure to read this article from a web developer on the subject, it’s eye-opening).

But there is a reason why this is happening, and I’m sad to say that the writers are partly to blame.

You see, they have a problem that web designers don’t have to deal with, and that problem is that they label themselves as “freelance writers.”

Why is that a problem?

Because Nobody Wants to Hire a “Freelance Writer”

No high-paying client that I’ve ever talked to has been interested in getting some “freelance writing” work done. Not a single one.

Do you know what they actually want?

Businesses want to hire folks who can head up a successful content marketing strategy that brings in new customers through relevant, well-written articles. They want folks who can write copy that is memorable, persuasive, and that gets customers to take action. They also want writers who can break down technical jargon into easy to understand tutorials and guides.

High-paying clients think about their goals, not about your process.

Since content marketing strategy is what I know best, let’s take a close look at a high-paying client who recently emailed me, DESPERATE for someone with writing skills: 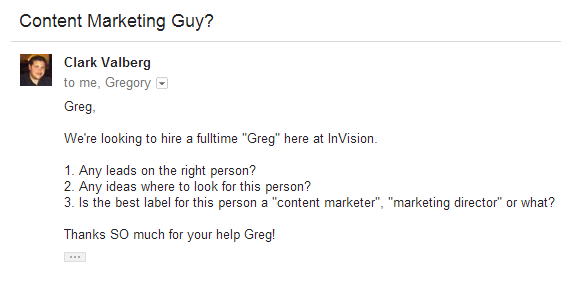 My buddy Clark Valberg is the CEO of InVision, an awesome, successful company that pays well to hire people who know their stuff.

Clark recently let me know that he wanted to hire a “Full-Time Greg” (someone to handle content strategy), but look at the exact language that he uses…

Is the best label for this person a “content marketer”… or what?

He is far from the only client with this problem: in the past month alone I have had 14 requests for ‘How can I find a content person?’ hit my inbox from a wide breadth of successful companies looking to pay someone.

You know what they never asked for? If I knew any freelance writers.

Here’s the kicker: You and I both know that the skill that separates good content creators from great content creators is the ability to write incredibly awesome articles. In other words, these companies are actually looking for a writer, but they don’t know it, and they will NEVER use that language when they are searching for someone.

In a world where this nonsense is deemed acceptable:

…and where even major publications ask people to contribute for free (“for the exposure,” you can kiss my ass), freelance writers are basically fighting an un-winnable battle against newbie’s who will write for free and folks in developing countries who will spew out 500 words for $5.

Do you know who isn’t having this problem?

Web writers who are targeting clients that are willing to pay. In other words, clients who aren’t hiring for pageviews, but are instead looking for someone who can handle a complete content marketing campaign or write copy that just oozes with persuasion.

The above is where most freelance writers smugly dismiss my argument and go back to getting paid less than I do.

I need you to read the following 2 articles…

The former will give you an idea of the explosive growth in the demand for online content creators, and the latter is a perfect example of why writers should actually feel confident when they get into tech or marketing fields that require great content.

They already have the most difficult skill.

Yes, you need to brush up on how to find a decent keyword and how to promote yourself online, but you should also recognize that your ability to write content that stands out in a sea of crap is actually one of the toughest skills to obtain, and it’s why being a writer first is still the most important element of these new ‘online only’ professions.

It’s just that nobody wants to hire ‘a writer‘ anymore!

The web designers are probably wondering why I included them in the title up there.

In a nutshell, the answer is that web designers aren’t feeling the heat as much as freelance writers due to the name of their profession: people are still willing to pay for web design, although designers certainly deal with a ton of crap too.

That doesn’t mean they are off the hook though!

I see struggling web designers falling for a miniature version of this trap all the time.

They try to sell “web design” and give very little thought to what problems they are actually solving for clients (as if any client sat and thought to themselves, “I need to buy me some web design!”).

Instead of positioning themselves as an expert in eCommerce, landing pages, or local business sites, they focus on ‘what you get’ (3 design iterations, blah blah blah). This makes them look like a commodity rather than an investment, and they get paid as such.

A good example of doing the opposite comes from teams like Marketit and their Landing Page Makeover service, which makes bold claims such as this:

This sort of selling ostracizes people who just care about things being pretty (ex: a painter who just uses their site as a showcase) and attracts people who are willing to pay big for a site that converts.

By not falling for the trap of trying to appeal to the widest client base possible (like the catch-all ‘freelance writer’ term), web designers can make more money by offering less, but to ideal clients who are willing to pay for that exact service.

Everyone’s favorite argument for articles like this is to find that one piece of anecdotal evidence that they know about and parade it around like it disproves everything.

Let me beat you to the punch.

I know a few successful “freelance writers” myself, and have even featured some of them here on the Bidsketch blog, such as Kristi Hines and Carol Tice, as well as Tom Ewer.

They actively describe themselves as freelance writers, but they are also really good at what they do, and tend to be the exception to the rule. Furthermore, they generally do “content strategy” for most of the brands that they work with, despite how they might prefer to label their work.

Point being: this article isn’t for them, it is for the majority of freelancers out there who are struggling to get great rates and who are floundering simply because they don’t know how to sell their services in the right context and to the right people.

Trust me, I know quite a few…

Since I’ve grown the Help Scout blog to 20,000+ newsletter subscribers in mere months with written content, now everybody and their mom has been asking me if I can refer a content strategist to them.

And I would love to, except I don’t know many content strategists, I just know a bunch of damn “freelance writers”!

We have some great tools available to help you get started. Take advantage of this free freelance writing proposal template.

I not only expect but in fact demand passionate, well-written responses down below, even if the point of your feedback is to tell me I’m dumb and totally wrong! 🙂

Know that this piece was only written to showcase a huge problem in an industry that I care a whole lot about.

I want you to get paid well, but if you’re going to be hard-headed and continually refuse to specialize, keeping in tradition with the majority of underpaid freelancers I know, you are going to at least need to make your case.

So, what say you?