My Faux Fail And The Truth About Resilience 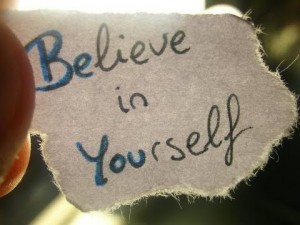 I  recently experienced what turned out to be a major growth experience, courtesy of an unexpected person.

I won’t bore anyone with details, but I realized with pity that this person will never reach their potential in life, because they honestly believe that they have to take shortcuts involving manipulation and victimization in order to achieve their agendas.

And, while their behavior could have spelled failure for me, it actually forced me to apply the lesson to entrepreneurship, and I realized this:

Success comes down to belief in one’s self.

Let’s take a look at a real-life example in the freelance copywriting industry.

Real Life Example: Why Copywriters Often Fail In Spite Of Their Numerous Resources

Like many freelance copywriters, I started out by hanging around other writers via online writing groups. While hanging out in one group in particular, I saw a pattern repeat itself, time and again:

There were always writers who talked about the books they purchased, the electronic courses they bought, the conferences they attended, and the guru mentoring sessions they’ve paid for.

Now, mind you, all of these are great resources for new copywriters or existing copywriters who might be stuck in a rut. But, there are strong reasons why there’s currently a ton of writers who are either broke, or have given up on the industry altogether.

Let’s look at some of the most common resource fails:

Books offer new writers a great foundation for learning the basics, along with advanced techniques. Anyone serious about their industry in writing or any other career field should be devouring books produced by respected industry insiders.

But, there comes a time to put the books down and implement what you’ve learned. That’s where many writers go wrong! They develop a false sense of security by feeding their brain information without training their brains on how to use the information correctly.

If all anyone had to do was read a book in order to learn a new skill, then we could all read books on how to be a billionaire overnight, right?

Once a copywriter starts earning enough money (or if they’re able to sock away a few dollars a month until they’ve reached a financial goal), they usually start attending the larger industry conferences.

These offer great opportunities to meet the masters, industry peers, and learn the type of top secret information that’s only learned at a conference.

The problem is, many writers hide behind the thrill of the conference without testing what they’ve learned at the conference. What’s the point of paying thousands of dollars just to get a rah-rah feeling?

There’s a ton of cheap ways to experience rah-rah, and they’ll equate to the same results that the writer will generate by not implementing what they’ve learned.

To say that there’s no shortage of copywriting guru mentoring is an understatement. There’s so many out there, it took me a while to figure out that when a guru spoke of copywriting, they could be speaking about learning how to write for magazines, blogs, marketing agencies, or corporations!

There are writers who love nothing more than bragging about their affiliation with their guru of choice. And, while guru mentoring can help a new or stuck writer learn industry shortcuts while avoiding industry pitfalls, spending money on the guru isn’t what actually propels the writer’s career.

While I’m at it, the same holds true for purchasing self-study training courses online. It’s sad when a writer invests untold sums of money into a training course, hoping that each new course will be the one that helps them to cash in on the seemingly-elusive six-figure lifestyle.

Are you noticing a pattern?

Nothing works for these people, because at the end of the day, they aren’t working it!

Regardless of the industry you find yourself working in (or building a business in), you can attend all of the conferences you can afford. You can buy physical books until your bookshelves buckle, and you can buy e-books until your reading device hard drive explodes.

You can even pay for all of the top-notch guru mentoring that makes you feel warm, tingly, and purposeful inside.

But, if you refuse to believe in yourself, and if you refuse to take ownership of your success, then you’re wasting your time, in spite of all of the resources you might have at your disposal!

What Are The Ingredients For Self-Belief?

Everyone has doubts and fears. This is part of the human experience.

Include the fact that working for yourself means that you’re willingly taking a path less traveled, and you have on your hands the recipe for:

But, here’s the thing:

Every recipe is comprised of ingredients.

So, if the recipe for negativity and failure is comprised of stagnation, doubt and fear, then what are the ingredients for success?

I believe that it’s comprised of the three character attributes below:

Stephen Key, the co-founder of inventRight and the author of the One Simple Idea Series was quoted on Entrepreneur.com speaking about when he knew in his gut that he was on the wrong path, and he needed to make things right by creating a new path:

Looking back, I can see that I made a lot of decisions that my friends and family didn’t understand at the time. In fact, I’m not sure that anyone believed in me back then. I’m proud that I have had the courage make changes when something didn’t feel right.

The truth is that I believed in myself when no one else did.

There will be so many unknowns in your career. But one thing I know for sure is that entrepreneurs must believe in themselves, especially when others don’t. Own the fact that it’s your life that you’re living and trust yourself to make good decisions.

Sometimes, you have to make decisions without the ability to see the light at the end of the tunnel, but you move forward anyway, because you have faith that you’re moving in the right direction.

You’ll definitely experience moments when things fall apart, or nothing goes your way, despite all of your good intentions and careful planning. You might even experience a soul-shaking disappointment that will make you question the direction of your life, like Eric Greitens did.

Here’s what he says about bouncing back:

When I came home from Iraq, I started my own company. At the same time, I started a nonprofit organization, The Mission Continues.

When I started working with veterans, I lived for months on an air mattress in a near-empty apartment, wondering if my organization would survive. When a veteran lied to us and tried to steal funds, I wondered if the effort was worth it.

Resilience is the virtue that enables people to move through hardship and become better. No one escapes pain, fear and suffering. Yet from pain can come wisdom, from fear can come courage, from suffering can come strength — if we have the virtue of resilience.

And, here’s what Mike Tyson eloquently said about resilience:

Everyone has a plan until they get punched in the mouth!

Not only does it take tons of resilience when life sucker-punches you (And it will!), it also requires that you dig deep down into your well of courage.

You might encounter lots of messages encouraging your self-confidence. But, before you can realize self-confidence, you’ll need to implement courage. As the famous saying goes, courage isn’t the absence of fear-it’s facing your fear and doing what you need to, anyway.

Yes, you might stumble and make a fool of yourself along the way. But, there’s really no such thing as a risk-adverse entrepreneur, is there?

The Practical Cost Of Stagnation And Low Self-Worth

Let’s take a down-and-dirty look at what happens when you fail to go to bat for yourself and your business.

You’ll lack important character traits that all successful entrepreneurs have, such as:

Believe it or not, those who are characteristically manipulative, sabotaging, and egotistical are usually people who don’t believe in their personal capabilities.

Your business can’t expand into new offerings, because your lack of revenue will lead to your taking on lower paying accounts, or projects that suck up time without commensurate compensation.

So, ask yourself what costs more:

A little bit of your ego on the line, or a lack of accounts receivable?

Because, one thing is certain-you’re going to have to deal with the accounts payable, both professionally, and personally.

It’s been about a week since I was figuratively hit over the head with my latest life lesson.

After taking a few days to recoup my senses, I realized that my fail wasn’t a failure at all, because it taught me what was working, what wasn’t working, and it gave me the courage to stand in my truth, moving forward on the path that’s genuinely right for me.

*Editor’s Note: Here’s one more tip for developing resilience-put your marketing skills to the test, learn how to overcome objections, and how to move on from possible rejections.

You can start by taking advantage of our free 14 day trial offer. Bidsketch wants you to grow your business by sending out as many proposals as possible-we’re making it possible with our streamlined proposal template service app.

by Terri Scott
Terri is a content marketing storyteller and strategist. She teaches marketing and entrepreneurship through stories for marketers of all stripes. Her specialty is creating narrative and she writes essays and memoir in her spare time. You can view her work at terriscott.contently.com, and she'd love to hear from you: https://www.facebook.com/profile.php?id=100011073971177
Previous The 3 Types of Posts That Are Proven to Generate More Leads
Next Mentoring: The Awesome, The Horrendous, And The Variables