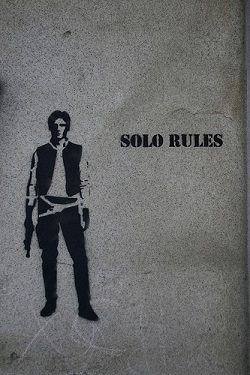 When looking for the ideal freelancer to learn from, few might expect a reference to this notorious Star Wars character.

But really, who better than Han Solo to emulate?

Han deals with force users, droids and imperial fleets on a regular basis, yet he’s been gifted with nothing more than a quick wit, his fellow “nerfhearder” Chewbacca, and the Millennium Falcon.

Despite having the deck stacked against him, Han is still notorious for being one of the slickest smugglers in the galaxy—and although it’s a bit more exciting than web design or freelance writing, it still makes him a fellow freelancer!

Although his work was done ‘a long time ago in a galaxy far, far away’, let’s see what Han can teach us about making our way as successful freelancers in the world today.

“Never tell me the odds!”

You won’t face them all (or all at once), but you’ll definitely be running into quite a few new situations along the way, and you have to be willing to roll with the punches.

Speaking of punches, Mike Tyson famously said, ‘Everyone has a plan, until they get punched in the mouth.’ Maybe it’s foolish to be taking advice from a guy who has ‘Ear-biting’ as a skillset, but I’ve always held that quote dearly (just not near my face).

To me, it means that no plan is so perfect as to anticipate everything, and you have to be willing to trudge on even when you unexpectedly get punched in the mouth.

Just as Han refused to let a skulking protocol droid prevent him from doing what needed to be done, you should refuse to listen to the naysayers when starting and growing your freelance business.

2.) Focus on what you are truly good at.

“Hokey religions and ancient weapons are no match for a good blaster at your side, kid.”

It’s okay to want to make more money, but many freelancers let this desire run wild, and they end up over-extending themselves trying to land every paying gig out there.

The crazy thing is, spreading yourself too thin (and offering too many services) puts you on the fast track for destroying your authority and earning potential—you become viewed a jack of all trades and a master of none.

Clients don’t care about the breadth of your knowledge, they just want to be assured that you can do the thing that they need done really, really well.

In fact, according to a recent study on The Presenter’s Paradox, featuring less than superb offerings (ie, anything other than your best skills) can decrease percieved value:

In laymen’s terms, putting only ‘average’ options next to ‘amazing’ decreased the perceived value of the ‘amazing’ options. Similarly, offering only ‘so-so’ services next to the things you are truly skilled at will just devalue your best work.

3.) Know how to sell yourself.

I’ve often heard the belief that there is no such thing as bragging—you are either lying or telling the truth.

I don’t fully agree with that, but I do believe that there is absolutely nothing wrong with marketing your skills in a way that highlights just how damn good you are at your job.

It’s not that you should shun humility, but think of it this way—if you don’t relay to your clients how much of an impact you can have for them, you’re not really telling the truth and you’re actually doing them a disservice.

Would you recommend a friend or a colleague ‘humbly’, or would you simply be honest about how good they are?

There’s nothing wrong with doing the same for yourself.

Princess Leia: I love you.
Han Solo: I know.

Selling your skills (especially when you are just getting started) can be nerve-wracking, but true confidence is only born when you allow yourself to act confident.

In other words, ‘fake it ’til you make it’ isn’t bad advice in this situation.

It takes a certain level of belief in yourself to successfully negotiate with clients about your rates and perks, but if you ever want to get paid what you are truly worth, you’re going to have to do it.

Fun fact: In the original scene, Han was supposed to reply with ‘I love you too,’ but Harrison Ford thought that didn’t fit with Han’s character, so he ad-libbed it. Although George Lucas didn’t like it, Ford fought for the line and it stayed in, now remembered as for it’s character defining delivery.

Even Han’s actor sticks to his convictions!

Are you really going to wait for Greedo to make the first move?

You can’t sit around and wait for great clients to fall into your lap, you have to be aggressive, reach out, and submit persuasive project proposals all on your own.

You have to ship. You can’t be afraid to follow up with clients, ask them for referrals, actively create a magnetic marketing plan and allow yourself some needed (and well deserved) self-promotion.

Chase down big clients that are going to put your skills to the test, network with smart people who can take your business to the next level (even if you’re an introvert), and never sacrifice your premium positioning for clients who balk at your prices.

In short, be a rugged, action-taking freelancer just like Han! That debt to Jabba isn’t going to pay itself.

Freelancers have to deal with situations that most other creative workers won’t ever have to worry about.

Maybe you’ll have to be like Han and shoot out the control console when things get ugly—in other words, you might have to step up and fire a client if it isn’t working out.

Maybe you’ll run into the good problem of having a ton of work on your plate. Don’t lose your cool and end up venting on a client, or worse yet, start dropping jobs you definitely have time to complete because you’re letting the stress get to your head.

“It takes 20 years to build a reputation and five minutes to ruin it.”

Most importantly of all, don’t let client disputes and customer complaints get under your skin and force you to make a mistake that ruins your sterling reputation.

Sometimes the best way to get what you want is to fly casual: over-thinking situations and getting burned out from stress do more to hinder you than to push you forward.

We’ve covered proven ways to be more productive to help you make better use of your time, but don’t fall under the ‘busy trap’ and think that the grind will save you—great things take time, and expending yourself to exhaustion every day can blow up in your face by hurting your creative output and your love for your work.

And how is Han supposed to collect his bounty if he’s too burnt out to handle Imperial Storm Troopers?

Are there any other freelance insights we might be able to gain from everyone’s favorite ‘scruffy looking’ smuggler?

Leave your thoughts in the comments!

by Gregory Ciotti
Gregory Ciotti loves small businesses & startups and gets nerdy about behavioral psychology on his blog Sparring Mind.
Previous Copywriting for Freelancers: Choosing the Words that Lead to Better Clients & More Sales
Next Five Strategic Ways To Create A Consistent Client Base Each Month And Recurring Revenue